Nuclear Verdicts: How Trucking Companies can reduce their Risk Nuclear verdicts are a hot topic in the trucking and transportation industry, and for a good reason. In 2010 there were less than 10 cases against trucking companies with a verdict over $1 million; in 2011, there were nearly 60, and there haven’t been less than 30 in a year since then. And it’s not just the number of cases that is increasing, but the amount of the verdict. The average verdict in 2010 was $2.3 million; in 2018, it was $22.3 million 1.
A single finding against a trucking company can be catastrophic, sometimes even forcing their closure. With that in mind, is there anything a company can do to reduce the risk that one of their drivers will be involved in one of these cases? The answer is: Absolutely! Yes, this COVID-19 pandemic is frightening. And yes, we should restrict our activities to only those that are essential. If your business hires workers for physically demanding jobs – and if your business is manufacturing, warehousing or transportation, you probably do – reducing the risk and expense of workplace injuries is a priority you can’t afford to ignore. And while accidents are sure to happen, 63 percent of the top ten workplace injuries identified by Liberty Mutual Research Institute are exactly the kinds of mishaps that pre-hire Physical Abilities Testing (PAT) is designed to help prevent.

Physical Abilities Testing: How it can help or hurt your company’s reputation The bottom line is ultimately one of the most important things a business organization considers with every decision. As such, risky financial moves are often avoided. If your organization requires a labor force capable of physically demanding work, there is an easy way to mitigate financial risk: the implementation of Physical Abilities Testing. 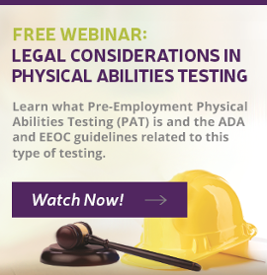