How to Protect Your Company from EEOC Scrutiny Pre hire physical abilities testing programs can yield impressive results in improving workplace safety, helping to ensure that the workers you hire are capable of handling the physical demands of the job, thereby reducing their risk of injury. By reducing injuries, these programs can also decrease workers' compensation costs significantly. However, if you're considering this type of testing program for your workplace, you should know that the EEOC has regulations regarding pre employment testing, and that those regulations place great emphasis on the reliability and validity of pre-hire tests. Here's what you need to know to protect your company against EEOC scrutiny in pre-hire testing.

First, as you develop your testing program, it is very important to use a physical abilities testing protocol with documentation of its reliability and validity – in the form of published research – as a basis for the development of your tests whenever possible. Additionally, even when based upon a validated testing protocol, further validation of your particular program is a good idea to ensure maximum effectiveness as well as EEOC compliance.

One means of confirming the reliability and validity of your physical abilities testing program is to test incumbent employees before beginning applicant testing. Incumbent testing can confirm that your test is not prone to screening out workers who are physically capable of performing the job – which means that pass rates should be high among current workers who are successfully performing these jobs every day. To overcome any fears or negative perceptions of this testing, incumbent employees should be assured that test results will be shared with employers only as aggregate data, which means without identifying individual employees. For instance, the employer will only be informed of how many people passed the test, not specifically who passed and who failed.

Additionally, following up on testing results after pre employment physical abilities testing is initiated can help with establishing test validity. Factors to keep tabs on include reductions in injury rates and pass and fail rates, including specific tasks that have higher than average fail rates and any significant differences in pass and fail rates between men and women or in certain age or ethnic groups – differences that may be identified as adverse impact by the EEOC if the selection rate of any minority group is less than 80 percent of the selection rate of the majority of applicants.

The appropriate sequence for test development is as follows:

So why is all this checking, double-checking and validating important in pre employment testing? Because staying on the right side of EEOC regulations can spare you a lot of hassle, scrutiny, and in the worst case scenario, regulatory actions and/or lawsuits. That means that being sure your pre employment testing is accurate, reliable, and perhaps most importantly, legally defensible. If your testing program does create adverse impact, you must be prepared to prove that screening practices are job-related and consistent with business necessity – which should not be a problem so long as the job demands analysis and test development have been built upon validated testing protocols. 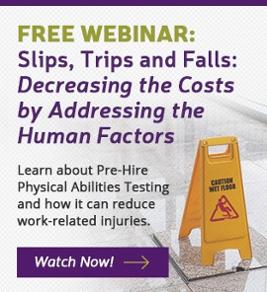